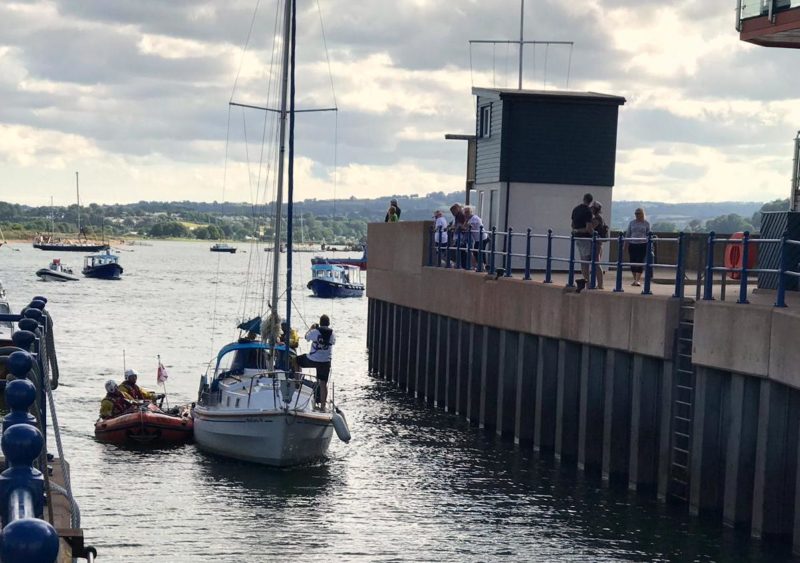 George Bearman II first launched at 4.21pm on Friday. A female windsurfer was in difficulty at Lympstone, near Red Cliffs. The first responder was a Lympstone resident who had been observing her for approximately 30 minutes, felt she had eventually found herself in trouble and could not get back on her board.  On scene within eight minutes, the Crew found her well, if a little tired, and not needing any medical assistance.  She was taken ashore safely at the Lympstone slipway and the D class lifeboat left the casualty at 4.43pm. She hadn’t appreciated the wind forecast (which was to drop) and the choppy sea state in the Estuary. The wind had dropped, as forecast, and she was having difficulty making way in the sea state.

Within two minutes of leaving the casualty, the three Crew volunteers were diverted to the second service on the other side of the river Exe. During the first shout, a Starcross resident had  advised the UK Coastguard that a 26′ yacht had come adrift near the steps at Starcross. The Crew were asked to check out the report, and found the yacht seemed to have broken from its mooring. There was no one on board, and no sign that anyone had been on board for quite some time. The volunteers streamed the boat’s anchor to secure it, where it had grounded near the shore. They departed the scene at 5.05pm.

At 5.10pm, on the approach to recovery at the boathouse, the Crew received a message to contact the RNLI Lifeguards as they had a jetski standing by a windsurfer in difficulty on the seaward side of Pole Sands, opposite the Boathouse and the Lifeguards Base. In the rough sea state, the jetski was unable to bring the windsurfer and kit back to shore. George Bearman II arrived on scene at 5.19pm, took the windsurfer and kit on board and brought him safely ashore to the boathouse. The cause was the same as the first shout – failure to appreciate the wind would drop and the rough sea state on the other side of Pole Sands meant he couldn’t get back unaided.  The gentleman was a bit shaken, but well and in no need of medical assistance.

George Bearman II departed the scene at 5.22pm and returned to the lifeboat station at 5.40pm, ready for service again at 5.45pm.

On Sunday 30 June, a Pan Pan call for help was received from a 26’ yacht in difficulty off Exmouth Marina. The yacht, with four people on board, had its propellor wrapped around a mooring buoy and needed to cut free. George Bearman II launched at 5.20pm, a Crew volunteer was put on board to free the yacht and the casualties were towed into Exmouth Marina.

As volunteers were rehousing the D class lifeboat, they witnessed a teenager ashore in an inflatable boat, making no progress against the ebb tide, offshore breeze going out to sea. Crew self-launched after watching him for 15 minutes, at 6.26pm to investigate, before he found himself in difficulty. The teenager was wearing only swimming trunks, with no means of communication.

‘When going to sea, please make sure the vessel is fit for purpose and you are suitably equipped. Toy boats are not designed for sea and tidal water.’