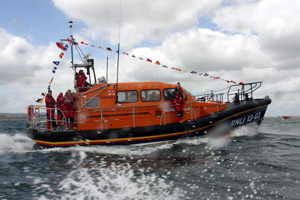 It is designed to be launched and recovered from a beach via a new faster and safer launch and recovery system, as well as lie afloat.

Designed entirely in-house by a team of RNLI engineers, the RNLI has harnessed cutting-edge technology to ensure this new lifeboat meets the demands of a 21st century rescue service, building on systems developed for its big sister, the Tamar class. 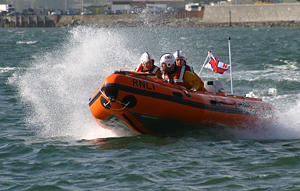 For more than 40 years the D class lifeboat has served as the workhorse of the RNLI Inshore Lifeboat (ILB) fleet. Significantly smaller in comparison to the rest of the inshore fleet, the D-class is also the only vessel not to feature a rigid hull. The main aspect of the boat would be both its size and weight. The D-class has been specifically designed as a light and highly manoeuvrable rapid response craft – a title which it gracefully exceeds.

The current ILB, D805, entered service at Exmouth on 12 January 2017 and was the second D class lifeboat provided for us by Donor, Pauline Smith in memory of her Grandfather.