Signalman F.H. Horne fired the signals for an exercise on 9 August and went home. He was however found dead later from a heart attack amongst trees near the lifeboat house. Committee of Management voted £15 to local fund.

Whilst lifeboat was being launched for exercise on 14 March, Coxswain Henry Squire, who was assisting, collapsed and died. Committee of Management voted £150 to dependants.

The lifeboat was launched on service on 5 November during a whole south east gale and very heavy sea to the French tug St Paul. The crew was comprised of older men and the Committee of Management granted them an additional award and sent them a special letter of thanks.

Centenary Vellum awarded to the station. 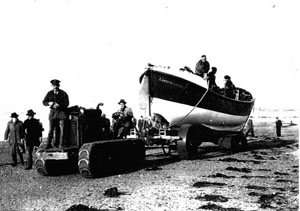 Thanks on Vellum awarded to Coxswain Thomas Horne for a service in heavy seas.

A Clayton launching tractor is provided.

Signalman Samuel Gifford was fatally injured en route to a launch, later suffering a stroke; he died on 25th December 1953.

Bronze Medal awarded to Coxswain Harold Bradford for the rescue of five crew from the cabin cruiser ‘Nicky’.