Exmouth lifeboat station was first established in 1803 with its first lifeboat being built by Greathead.  Apparently the station ceased to exist for some years until it was re-established by the Institution in 1858.

Six RNLI medals for gallantry have been awarded, five Silver and one Bronze the last being voted in 2012 to Roger Jackson.

The first lifeboat was built by Greathead. Apparently the station ceased to exist for some years until it was re-established by the Institution in 1858.

Silver Medal awarded to Coastguard Chief Officer, Lt John Sargeant, R.N. for the rescue by means of ropes, of the crew of seven from the brig Unity, on 6 December 1830.

Silver Medal awarded to local pilot, Thomas Pincombe, Jnr, for an attempt to rescue the crew of the schooner Mary. 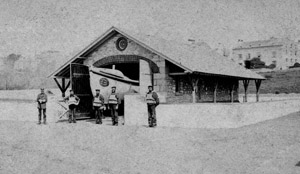 Victoria in the Boathouse.

Brigantine Julia wrecked on Pole Sands. This unsuccessful service and subsequent capsize led to the stationing of a larger lifeboat, also named Victoria.

On 1 November the lifeboat was launched on service to schooner Lady Elizabeth but was unable to find her. The crew then tried to beach but just before dusk in a strong gale and heavy rain the boat was struck by an unusually heavy sea and capsized. Fortunately all the crew regained the boat. They then made for the station which they reached after 5 ½ hours of severe toil at rowing.

Silver Medals awarded to John Bradford, Uriah Bradford and George Prowse, for gallantly launching a small boat, and at considerable risk, rescuing the crew of six from the schooner John Gronsund of Svendborg, which had been driven on the Pole Sands in a strong south easterly gale and a very heavy sea on 4 January.

New lifeboat house constructed on site of existing one at a cost of £700, to accommodate larger lifeboat, also named Joseph Somes.