The Thanks of the Institution inscribed on Vellum were accorded to Coxswain Brian Rowsell and crew member Peter Rowsell in recognition of their service in the inflatable lifeboat on 29 May when three bathers were rescued in a heavy sea two miles south west of Exmouth.

Framed letter of appreciation signed by the Chairman of the Institution, The Duke of Atholl, awarded to Coxswain Brian Rowsell in recognition of the service carried out by him in the station’s boarding boat on 19 December, when the crew of two of the yacht Michelle were rescued. This service was performed in very difficult conditions with a strong south south easterly gale and very rough, short seas. Leaving and entering the dock entrance were hazardous operations. Mr Mike Clifton, a former crew member of the inflatable lifeboat who accompanied Coxswain Rowsell, was sent a letter of appreciation signed by the Director, Rear Admiral W. J. Graham.

Thanks on Vellum and Service of Merit Badge awarded to crewman Geoffrey Ingram in recognition of his meritorious action on 7 April when he entered the sea from the lifeboat Caroline Finch  to give support to two girls who were in considerable difficulty after a speedboat sank one and a half miles east by south of Exmouth.

44ft Waveney-class lifeboat Louis Marchesi of Round Table on station.  Refurbishment of the crewroom and repairs to tractor house. 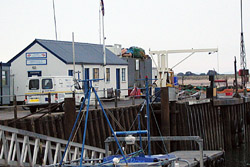 Dockside building demolished and replaced by two port-a-cabins in a nearby carpark. 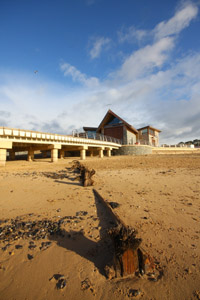 The Lifeboat Station at Maer Rocks is completed, becoming operational on 20 November.