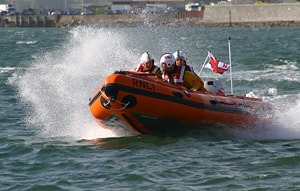 At 13:26 hrs today Friday 9 August 2019 Exmouth’s Inshore Lifeboat, George Bearman II was alerted by HM Coastguard following a report by a member of the public that two individuals had capsized in a dingy and appeared in difficulty on the River Exe.

The lifeboat launched shortly afterwards and was on scene minutes later where the crew, led by Helm David Preece and volunteer crew Harry Griffin and Roger Jackson found the capsized dingy with two persons in the water on the River Exe off Lympstone Sailing Club and another individual that required assistance on shore. The dingy was damaged and lost its centre board and rudder.

All three persons were recovered, together with the dingy, and taken to safety. No one was injured.

Inshore Lifeboat Helm, David Preece, who led the rescue said, “In the last few days several severe weather alerts, including a yellow warning,  about heavy rain, strong winds and rough tides have been issued. It is vital to pay heed to those warnings and not venture out on the water in such conditions.”

The Inshore Lifeboat returned to station at 15:03hrs today and was back on service at 15:30hrs.

The RNLI Water Safety advice, ‘Respect The Water’, can be found here : https://www.respectthewater.com