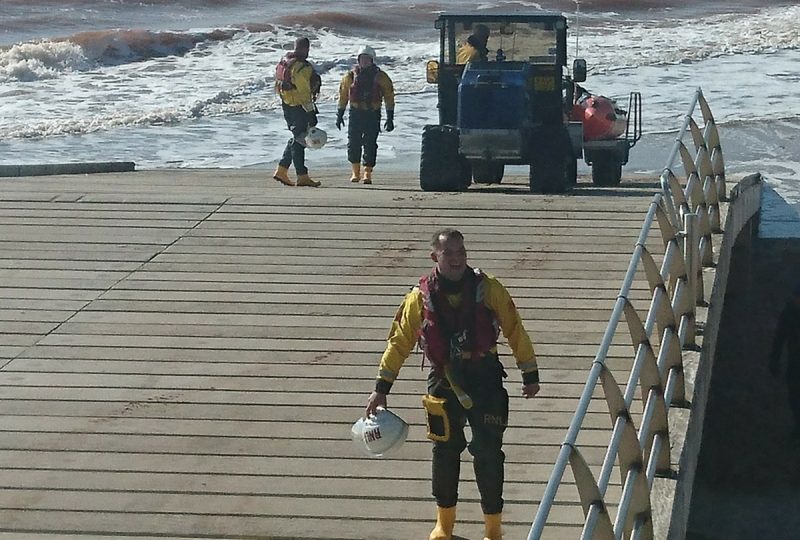 On 24 February, inshore lifeboat George Bearman II launched at 2pm to a dog in difficulty at Langstone Rock, Dawlish Warren. At 12.10pm on 25 February, volunteers self-launched after witnessing a kite-surfer in difficulty, in sight of the lifeboat station.

A mobile call to the UK Coastguard triggered Crew volunteers’ pagers to launch inshore D class lifeboat George Bearman II at 2pm on 24 February. A dog was trapped on a ledge on Langstone Rock, two miles west of the lifeboat station. Crew volunteers were on scene within eight minutes and discovered that the spaniel had fallen into the water during a walk and had managed to scramble onto the ledge in the strong surf. One of the Crew climbed onto the ledge and recovered the dog to the tearful owner who had wisely not entered the water herself and instead had called 999 for help. Crew volunteers gave safety advice for the future.

On 25 February, Crew volunteers were just ending a familiarisation training session at the lifeboat station when they witnessed a kite-surfer half a mile west of the boathouse. George Bearman II launched at 12.10pm to investigate. On scene within two minutes, Crew found the kite-surfer had been separated from his board and was grateful to be recovered ashore to the beach to safety.

The conditions were challenging with a swell of 1.5 metres and an approximate sea temperature of 8 degrees. Volunteers continued to monitor two windsurfers also thought to be in difficulty, but a further launch was not needed.

‘Consider surfing in small groups of at least twos, so you can watch out for one another. Never ride out further than you can swim back. Take means of communication with you in case you find yourself in difficulty and always tell someone you are going out and when you will be back.’