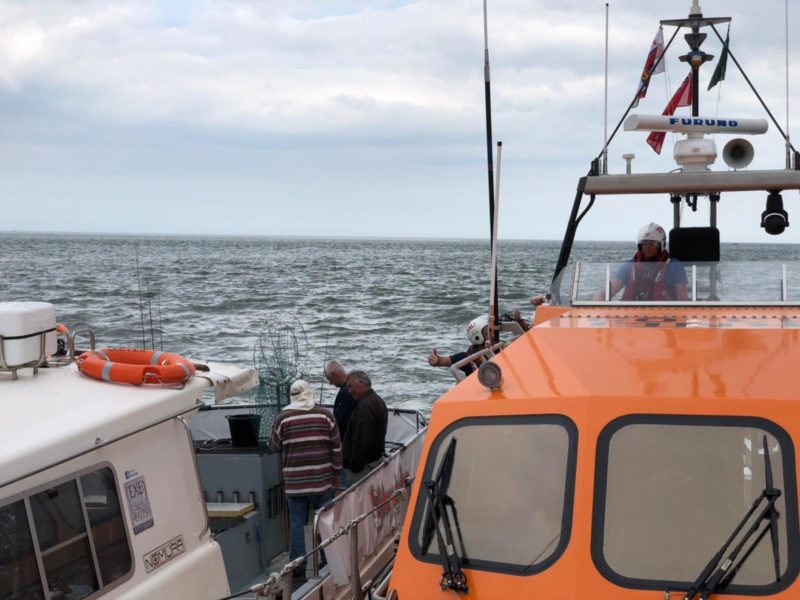 On the return journey, at 4pm, the Skipper of a chartered angling vessel with 12 people on board called Exmouth Marina for assistance. The 14m boat had suffered gear box failure approximately half a mile south of Exmouth lifeboat station. The Assistant Harbour Master initiated the call for help via the Crew volunteers and the UK Coastguard. A tow was established at 4.05pm and the casualty vessel was towed alongside into Exmouth Marina at 4.40pm to safety.

As Shannon class lifeboat R and J Welburn landed on the beach at 5.30pm, RNLI Lifeguards on duty at Exmouth Beach requested assistance for a lady who had a suspected fractured collarbone. The Entonox kit was passed to a Shore Crew volunteer and a Crew volunteer disembarked to hand it over to RNLI Lifeguards who administered the pain relief. The casualty was passed to an ambulance.

As Crew volunteers were leaving the lifeboat station, they were asked to investigate a suspicious boat which National Coastwatch Institution volunteers had spotted during a routine watch. The small speedboat was moving up the river Exe channel and there was concern for the welfare of the occupants as it looked unseaworthy. Inshore lifeboat George Bearman II launched to intercept the vessel close to Mamhead Slipway at 6.35pm. Five young men were on board, none were wearing lifejackets in an unsafe and overloaded speedboat. One of the Crew volunteers gave important safety advice.

‘It’s been a busy weekend attending local PR events with our flank stations. These events are important for us to show appreciation to our supporters in Lyme Bay, also to show tourists who visit our area that we are very much a joined-up lifeboat community.’