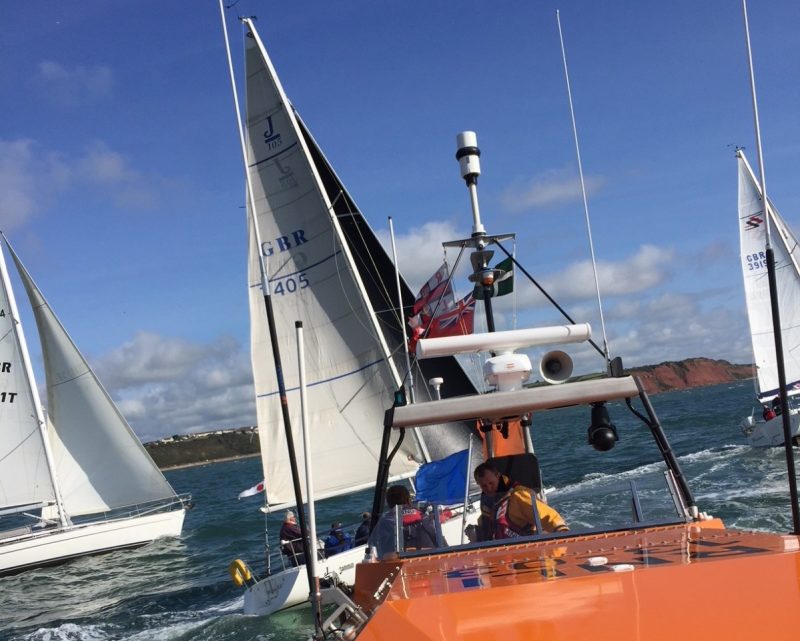 Exmouth’s inshore lifeboat was called out twice over the weekend, assisting three people in difficulty. Crew volunteers were on exercise on their Shannon class lifeboat during the annual Champagne Challenge community sailing event.

The Coastguard had contacted National Coastwatch Institution volunteers who maintained a visual on the male and female in their twenties, on Bull Hill in the river Exe.

Exmouth’s Crew volunteers were on scene within 8 minutes. Before arrival on scene, a passing water taxi took the casualties on board for safety, handed them over to the D class lifeboat on arrival and Crew volunteers brought the couple ashore at Exmouth Marina.

‘Apart from being a bit shaken and embarrassed, the casualties were in good form and needed no first aid.  They said they had seen other people and dogs walking on Bull Hill and thought it would be a nice thing to do. They failed to notice when the other people were heading for shore and by the time they realised the water was coming in, it was too late. We would advise anybody walking by the coast to check local tide times – you can pick up a tide table from our shop.’

On the morning of 23 September, Crew volunteers were on exercise in the river Exe and assisted starting the annual Champagne Challenge event, organised by the Exe Sailing Club. Soon after the Shannon class lifeboat R and J Welburn was washed down, pagers were activated for a kite surfer in difficulty on Pole Sands, half a mile south of the lifeboat station. The D class lifeboat launched at 12.50pm and Crew volunteers brought the casualty ashore to the beach to safety.