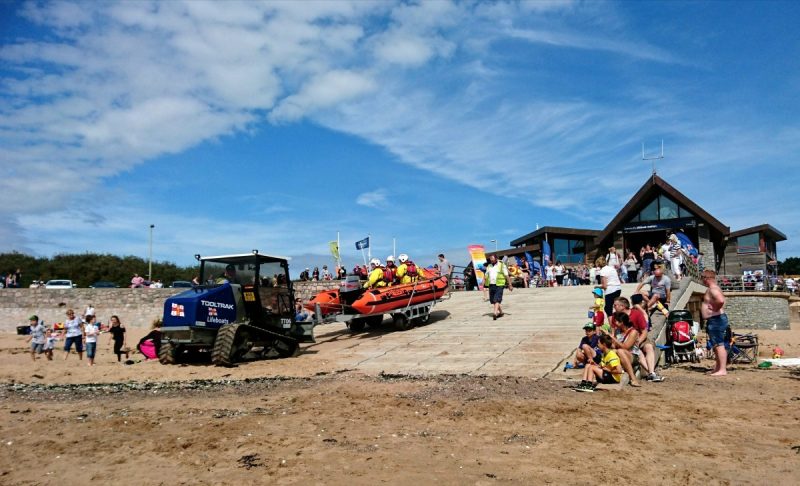 Fine weather and hundreds of visitors to this year’s Exmouth lifeboat Open Day on 13 August led to a successful event. Visitors witnessed two shouts and a planned demonstration during the day.

With queues throughout the event, the first visitors stepped on board Shannon class lifeboat R and J Welburn at 10am and the last stepped off at 5pm. Crew volunteers committed their valuable time to talk about their roles and show visitors around both lifeboats and launching equipment.

At 11.30am, pagers sounded and within minutes inshore lifeboat George Bearman II launched to rescue two men on a broken down RIB off Straight Point. After towing them to their mooring in the river Exe, the volunteers returned to their Open Day duties an hour later.

At 3pm, a scheduled demonstration of a man overboard rescue took place in front of the station with RNLI Lifeguards on their rescue water craft. The D class lifeboat was activated again and the two RNLI teams located and recovered the Ruth Lee training mannequin from the water.

At 4.45pm, George Bearman II was tasked again unexpectedly. This time a 26’ yacht was seen to be in difficulty on a sand bank, half a mile south of the station. Crew volunteers brought four people ashore from the casualty vessel and left the two owners on board until the tide lifted an hour later. At the same time, an RNLI Lifeguard who had taken part in the demonstration was tasked to bring ashore, a kite surfer in difficulty.

Fundraising Vice-Chair, Rory Carrig had organised the Open Day for the first time. He said:

‘Our fundraising stalls alone raised over £900 to help our Crew continue to save lives at sea. Our shop was busy and there were queues throughout the day for Antonio’s ice-creams and Krispies’ burgers.

‘I’d like to thank everyone for coming along and all the volunteers and their families who helped at the event, including independent stall holders for their support. I’m very grateful to our Crew who already dedicate regular hours to train and then be on-call every day of the year, for their extra commitment.

‘The unexpected call-outs meant that visitors could see how vital our fundraising efforts are for the station. Our next event is the Mouth2Mouth Mini rally at station on 10 September in the afternoon.’ 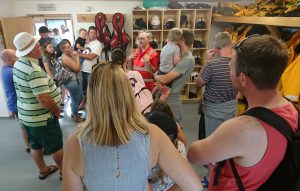