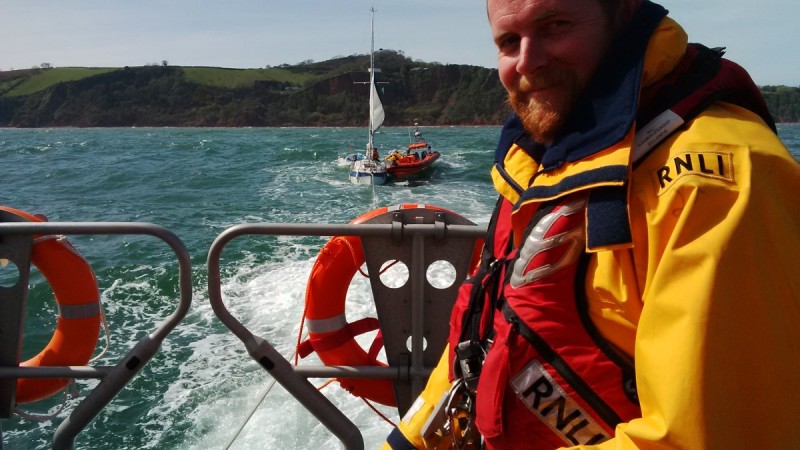 Teignmouth and Exmouth lifeboats launched on the afternoon of 20 April to assist a lone sailor on board a 28 foot yacht in difficulty off Teignmouth bar, in rough conditions.

Teignmouth lifeboat received a request to launch the Atlantic 85 class lifeboat the Two Annes at 1.57pm. The volunteer crew reached the casualty and vessel quickly and considered it was at risk of being driven ashore. Due to the size of the vessel and sea conditions, the crew requested the assistance of the Exmouth Shannon class lifeboat. The male casualty was transferred to the Teignmouth lifeboat and was taken to the Teignmouth boathouse.

Exmouth’s Shannon class lifeboat R and J Welburn launched at 2.35pm and arrived on scene, half a mile east of Teignmouth bar at 2.50pm. The yacht had suffered rudder damage and lost its steering ability. Within five minutes, an Exmouth RNLI Crew volunteer was put on board to supervise the tow after the skipper of the casualty vessel was transferred ashore after suffering sickness.

‘The sea state was rough with at least a 3 metre swell, winds gusting 30 knots and once we arrived on scene, we discovered there was 2 feet of water inside the boat. The casualty was transferred to Teignmouth lifeboat station by their Crew volunteers who looked after him. It was too rough to tow the yacht into Teignmouth or Exmouth, so we took the yacht to a berth at Torquay Marina for safety.’

The yacht was secured at Torquay Marina at 3.40pm, R and J Welburn returned to Exmouth beach at 5.20pm and was ready for service again at 6.30pm.