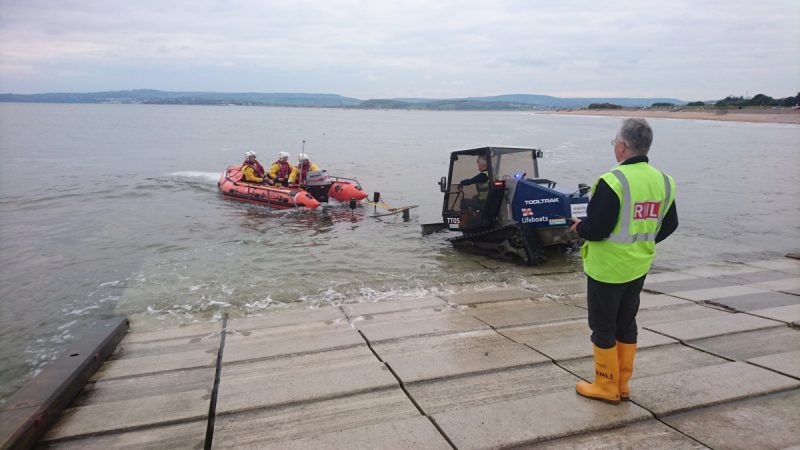 On 28 April, at 7.25pm volunteers tasked to investigate something seen floating down the river Exe. Once on scene, an old tender was discovered with nobody on board. The Crew took it to Belchers slipway so the Coastguard could arrange for it to be collected by the council and disposed of.

Later in the evening, at 11.05pm, the D class lifeboat was tasked to a 21′ speedboat which had suffered engine failure and ran aground on the river Exe, between Powderham Castle and Lympstone, on sand flats. There were four people on board and one had been in the water. With assistance from a local water taxi, the four casualties were taken ashore at Exmouth Marina. Crew volunteers laid down an anchor for the speedboat to float itself in the morning rising tide.

‘The casualties had no safety equipment on board – no lifejackets, VHF radio or flares. Stranded in the middle of the dark estuary with a fast flowing sring tide, they used their mobile to call the water taxi to help them. However, they couldn’t be reached by boat as they were high and dry. The Coastguard was informed and in turn, the lifeboat tasked.’

‘We were on scene within 17 minutes and waded across sand flats to recover three casualties to the lifeboat and the water taxi operator recovered the casualty who had been in the water. No-one needed casualty care, all were extremely grateful and realised how much difficulty they’d been in. We took them ashore to safety at Exmouth Marina.’

‘It’s extremely difficult to navigate around the river Exe in the dark. We would advise everyone taking to the water to wear lifejackets and take suitable means of communication should they find themselves in difficulty. The current high spring tides means that water rushes out of the estuary very quickly, so we would recommend checking the tide times before you set out.  With only a mobile phone as their only method of communication, they were lucky to find a signal. 999 should be the first number you call when you find yourself in difficulty.’

On 29 April at 6.30pm, George Bearman II was tasked again following a 999 call by the member of the public concerning a person lying down, having fits in the water by the Clock Tower. Crew volunteers were on scene within five minutes and Devon & Cornwall police officers had already brought the lady ashore. Crew stayed with the lady to reassure her and wait until the ambulance arrived.