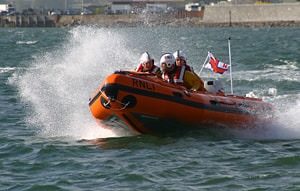 Nothing was found following an extensive sweep of the area and the search concluded at 0:52hrs today, Saturday 27 July 2019 when the lifeboat returned to station.

The male, who had been missing from Starcross, South Devon for nearly 24 hours, was described as white, 30 yrs, black hair sometimes styled in a ponytail, wearing a black Adidas T shirt.