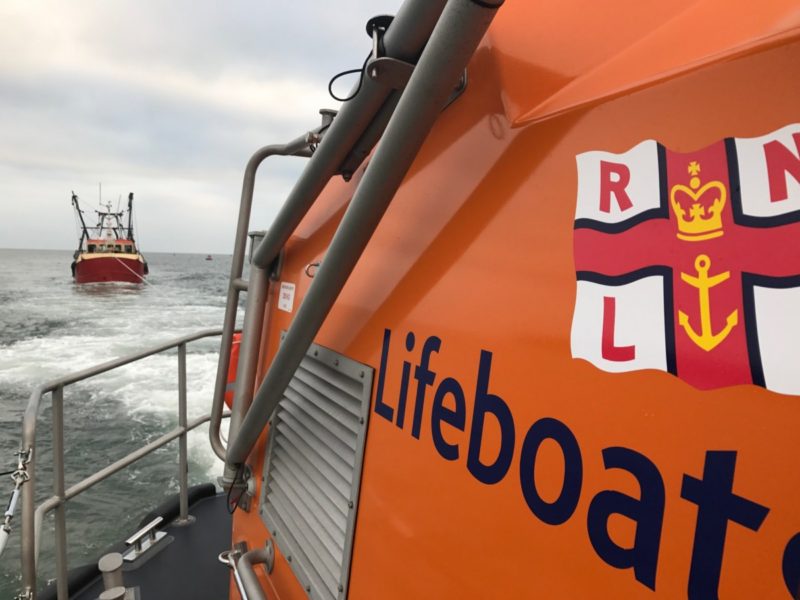 At 5pm on Thursday 16 March, volunteers on a Shannon Launch and Recovery System (SLARS) training exercise were diverted to assist a local fishing vessel with a rope wrapped around its propeller at the entrance to the river Exe.

Shannon class lifeboat R and J Welburn took over the tow from another fishing vessel at the safe water mark and towed the Scalloper to a mooring in the river Exe. Volunteers returned to the exercise at 5.40pm.

On Monday 13 March, two Crew volunteers made up a passage Crew to take relief Shannon class lifeboat 13-12 Cossandra on passage from Cardiff to Torbay (Brixham), with only one stop at Newlyn for fuel. The Crew arrived on Exmouth beach on Tuesday mid-morning, where relief Shannon Launch and Recovery System (SLARS) SCT-01 had already been delivered in readiness. Whilst some planned maintenance was taking place on Exmouth’s Shannon 13-03 R and J Welburn, Cossandra was on service at Exmouth lifeboat station.

Between Tuesday and Thursday, the Lifeboat Trials team tested a new prototype of Shannon carriage on Exmouth beach. Designed by Supacat, based in East Devon, the new non-powered design would save our charity vital funds to run at future beach-launched Shannon class stations with less challenging terrain.

Cossandra left on passage to Poole at 3pm on Thursday 16 March and the relief SLARS left on two low loaders by road shortly afterwards. Volunteers proceeded to train on Exmouth’s Shannon class lifeboat R and J Welburn to give probationary Tractor Drivers additional training, when the Scalloper called for assistance.

‘We would like to thank the community for their patience last week. Our station was chosen to host the trials as we are the closest beach-launched Shannon class lifeboat station to our headquarters at Poole.

‘During the week, we’re pleased to report that Crew volunteers Paul Balbi and Andy Stott have now passed out as Mechanics; two trainee Tractor Drivers are close to passing out and after six months as trainee Shore Crew, another volunteer will be progressing to trainee lifeboat Crew soon. This week has proven that training and trialling new kit is continuous and we thank the volunteers, especially their understanding families and employers, for taking on extra duties.’ 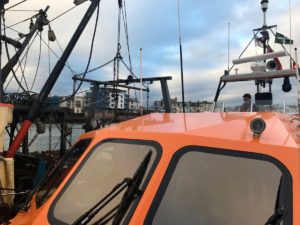