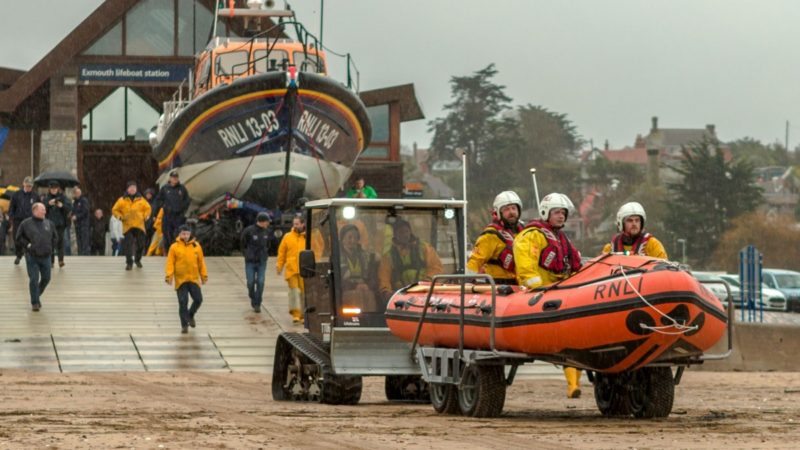 A new D class lifeboat arrived at Exmouth lifeboat station on 12 January as George Bearman reached the end of her 10-year operational life.

More than one hundred supporters, past and present volunteers and members of the public, including school children turned up at the station in the heavy rain, to watch the event.

It was Donor, Pauline Smith’s wish to be present when the second lifeboat she had funded in memory of her Grandfather arrived. After Crew volunteers attached the engine and added diesel, George Bearman II joined her older sister, George Bearman on the water for a brief display of the D class lifeboat capabilities.

Pauline was offered a seat in the launching tractor for the best view. She said:

‘As I saw both lifeboats come towards the shore, I was so proud! Also, I was quite sad to see the old one go on her last trip in Lyme Bay, but hopefully George Bearman II will give just as good service for the next 10 years.’

George Bearman rescued 466 people and saved 28 lives in 10 years at Exmouth. Launching 614 times, the Exmouth inshore lifeboat is known as the ‘workhorse’ of the station, tasked to approximately 80% of call-outs.

After George Bearman was taken away to the charity’s headquarters at Poole and George Bearman II settled into the inshore lifeboat hall for the first time, the event closed with various volunteer award presentations with former RNLI Chairman Charles Hunter-Pease.

The official Naming Ceremony for George Bearman II will be held in late Spring 2017.

(NB A gallery of the day’s photos, along with award presentations which followed, are being compiled and a link will appear here when ready)