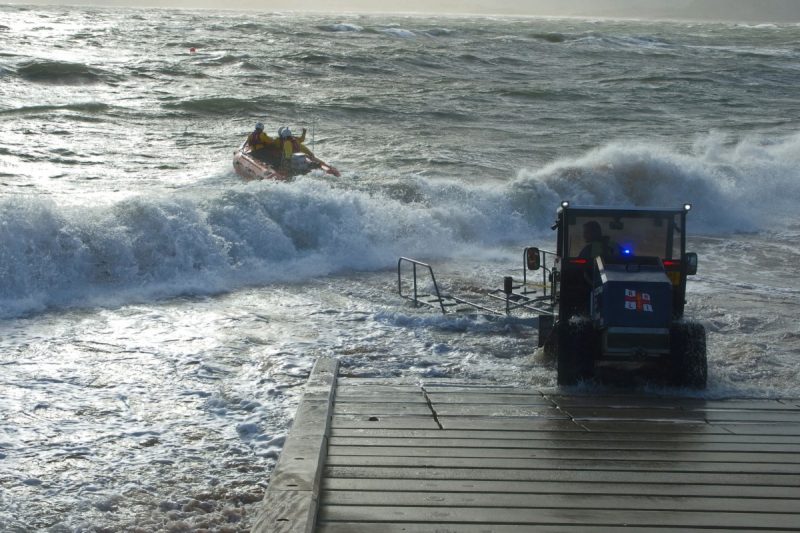 Inshore lifeboat George Bearman II launched at 12.40pm on 7 January after a member of the public called the UK Coastguard concerning two people in the water, off Belchers slipway in Exmouth.

The two men were calling for help after their dinghy capsized. It is believed they hit a wave and the boat started to fill with water. The conditions were a strong Easterly force 3/4 with confused sea conditions.

On scene within nine minutes, Crew volunteers found the casualties clinging to moored boat. It is estimated they were in the cold water, without lifejackets for 15 mins.

‘We took the men to Exmouth Marina where Exmouth Coastguard Rescue Team and an ambulance was waiting. The casualties were given warm showers & administered oxygen as both men were suffering from hypothermia & sea water ingestion. One seemed to recover straight away but the other was in a worse condition, so they were both taken to hospital by an ambulance for observation.’

After a search for their dinghy, George Bearman II returned to station and was ready for service again at 1.44pm.

‘Before using a boat in strong winds and tides, please ensure that you are wearing warm clothing and a suitable lifejacket, ideally one fitted with a crotch strap, hood, whistle and light. Take a means of communication: VHF radio on channel 16 or if using a mobile, phone 999 or 112 for the Coastguard.

‘If you can postpone your sailing in weather that could prove a risk to yourself, please do not go on the water, as there is no point in risking your lives and that of our lifeboat crews.’