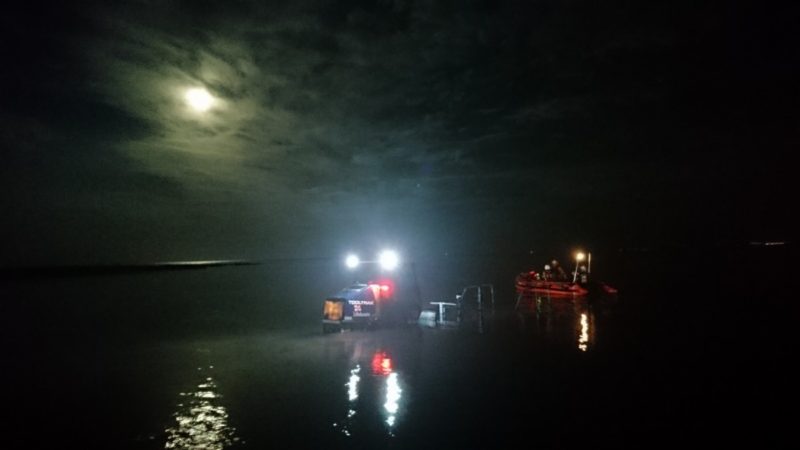 On the evening of 19 July, inshore lifeboat George Bearman was tasked three times within three hours to people in difficulty on the coast and in the river Exe.

The first call-out followed a call to the Coastguard from a concerned member of the public at Budleigh Salteron who had seen a jet-skier break down off the beach. Launching at 8pm, Crew volunteers were on scene within 15 minutes but had no sightings of the jet skier in difficulty.

At 10pm, volunteers were tasked by the Coastguard following a call from a member of the public after cries for help were heard in the dark near Imperial recreation ground. A young man had gone aground in a 12’ tender and was flashing a light to attract attention. George Bearman was on scene within 12 minutes, volunteers towed the casualty to a mooring at Shelly Beach and arrived back at the boathouse at 10.30pm.

As the Crew volunteers were washing down the inshore lifeboat, the Coastguard tasked the team once again following a call from four people in a broken down rigid inflatable boat in the river Exe. Launching at 10.46pm, the inshore lifeboat arrived on scene, 150m east of Cockwood and towed the two men and two women to the pontoon at Starcross Fishing and Cruising Club.

‘The casualties had been stranded for over an hour and although they were all wearing lifejackets, they had no VHF radio as they were only anticipating a short journey. They had rung directory enquiries and requested the number for the lifeboat station and called us at 9.30pm. Nobody was at the station and they had left a message on the answerphone. Whenever using a mobile phone for an emergency call of any nature, dial 999 and get the operator to put you through to the correct emergency service. Eventually they called 999 at 10.30pm and the Coastguard could task us accordingly.

‘Our station isn’t manned 24/7 and our Crew are volunteers who are called to the station when their pagers are activated by the Coastguard in an emergency when lives are at risk. Please do not hesitate to call 999 if you find yourself in difficulty.’