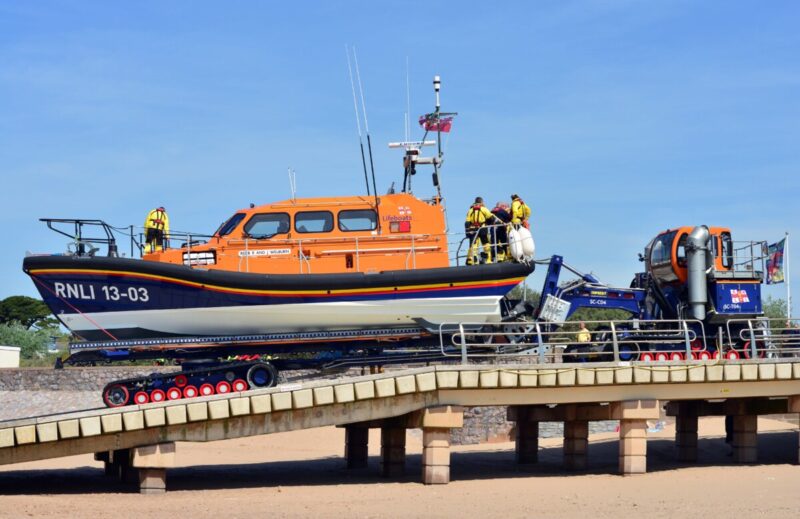 By 2020 the significant sand movement at the bottom of Exmouth lifeboat station’s ramp meant the Shannon class all-weather lifeboat and the inshore D Class lifeboat could no longer be safely launched and recovered directly from the station. There has been significant movement of the beach levels across Exmouth beach for some time before then, and the levels continue to change.

The RNLI investigated the best long-term solution to ensure continued operation of the ramp whatever the sand levels did in the future. The solution was to extend the ramp at a steeper incline to a further depth of c. 2.5 metres below the new, much reduced, sand level. The end of the ramp now reaches the bedrock below the sand. The new extension being c. 10 metres long.

The lifeboats can now remain on service from the station and the continued dedication of the crew in these unforeseen circumstances, has been rewarded, and the lifeboat will be able to use the ramp whatever the beach levels do in the future.

We would like to give huge thanks to our volunteers and the local community in Exmouth for their continued support. We know people have various questions relating to this work, so please find below some FAQs.

Why didn’t the RNLI build the ramp down to the bedrock originally?

When the station was built, the sand levels presented no cause for concern. Indeed all the advice, consultation and investigative surveys pointed to the length and depth the ramp was dug into the beach as being more than adequate for the typical rise and fall of the beach levels. The recent unprecedented sediment movement within the Exe Estuary has made clear the requirement to alter the ramp beyond the initial assessments.

The level of more recent sand loss along Exmouth Beach is far greater than the usual rise and fall through the seasons. Many of the structures along the seafront are being undermined, including other ramps onto the beach. No one foresaw the drop in the beach levels that has occurred

How much did it cost and how will it be funded?

The works have cost £0.5 M and have been funded, as are all lifeboat operations, by the generous public donations to the RNLI.

Having the all-weather lifeboat on the mooring opposite the Marina presented multiple issues in terms of accessibility, crew welfare, and the condition of the lifeboat itself. Changes in the channels around Pole Sands meant the lifeboat could not get out to sea at some low tides, so we changed to a carriage launched lifeboat system that can drive the lifeboat to the deeper water. The purpose-built station and boathouse resolve these issues so the lifeboat can get out to sea whenever it is needed.

Why is the lifeboat station situated where it is?

The location of the lifeboat station and boathouse is ideal as it is in the right position for the Shannon Launch and Recovery System (SLARS), which allows us to launch to save lives at sea at any state of tide. The location is a lot more accessible as it avoids the need for a boarding boat, has ample parking, and houses both lifeboats in the same building. It also improves crew welfare as the volunteers have proper changing and toilet facilities, as opposed to the portacabin used before. The location carries practical benefits for the condition of the lifeboat itself because maintenance, fuelling and cleaning of the lifeboat are all made easier. Furthermore there were no other options for its location.

Why not keep the lifeboat inside the marina?

Exmouth Marina is very busy and popular and when spare space is available the owners kindly let us use a berth free of charge. The footbridge across the marina entrance needs to be raised whenever larger vessels (including the lifeboat) need to get in or out. Although it is unlikely, having the lifeboat inside the marina includes the risk of the bridge breaking down and leaving the crew unable to get out to someone in difficulty. The best option for our lifeboat’s location is being on its carriage in the boathouse, where it can launch and get out to sea at any state of tide and whatever the sand level does in the future.