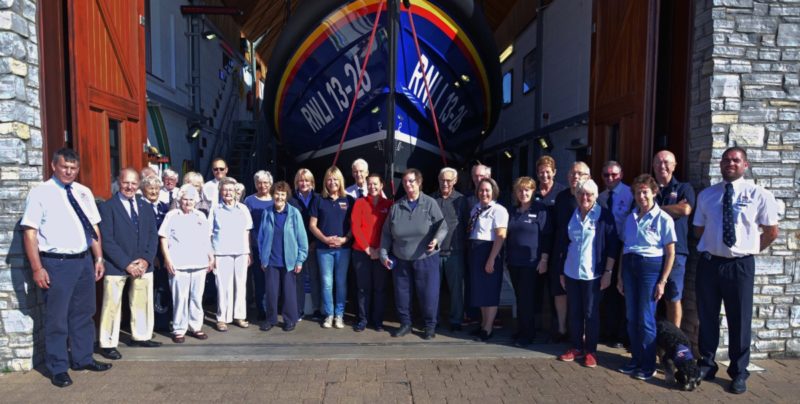 Last week, the charity that saves lives at sea published statistics from 2018. Exmouth lifeboats launched a total of 73 times on service, assisted 53 people and saved three lives. The sixth busiest station in the south west is recruiting and training in time for the busy summer season.

‘2018 was one of the busiest years for our volunteers, since I took over as Coxswain at Exmouth. As well as the services, we have had an intensive period of training that has allowed us to successfully pass out a new batch of shore crew and some additional new Shannon launch and recovery drivers. I would like thank not only the volunteers, but their families for their dedication throughout the year, that enables us to operate to the standard that the RNLI requires of its volunteers.’

In 2018, Exmouth Lifeboat Fundraising Team raised a total of £73,327.19 which included £10,000 from the Fish and Chip Ball, organised by the newly-formed Events Team. 25 volunteer Tour Guides showed 5,812 visitors around the station which notably increased donations in the collection boxes. The Shop took £95,071 and was the 12th busiest in the RNLI and third in the Channel region.

‘Our volunteers have put in an enormous amount of effort and dedication to keep our lifeboats afloat. Today, fewer people carry cash so we are facing new challenges in raising funds by thinking up new ideas together – that’s why last year’s statistics are so impressive with Exmouth out-performing many other branches in the Institution. These funds, together with legacies are what help keep our two lifeboats ready for service, the running costs of the station and the crews fully kitted out and trained.

‘All of this would be impossible without the many volunteers who make up the boat crews and the shore crews: the people who respond to their pagers at any time of day, any day of the week, whatever the weather. Thank you to everyone who has contributed in whatever way during the last year: it does make a difference.

‘I would like to acknowledge the contributions of Don Hodgkinson, Bernice Williams and Linda Cawsey who stepped down from key roles last year, each after decades of loyal service. We are currently recruiting a variety of roles to retain our charity’s reputation within our community. All training will be provided, so please get in touch if you’d like to join us in saving lives at sea.’